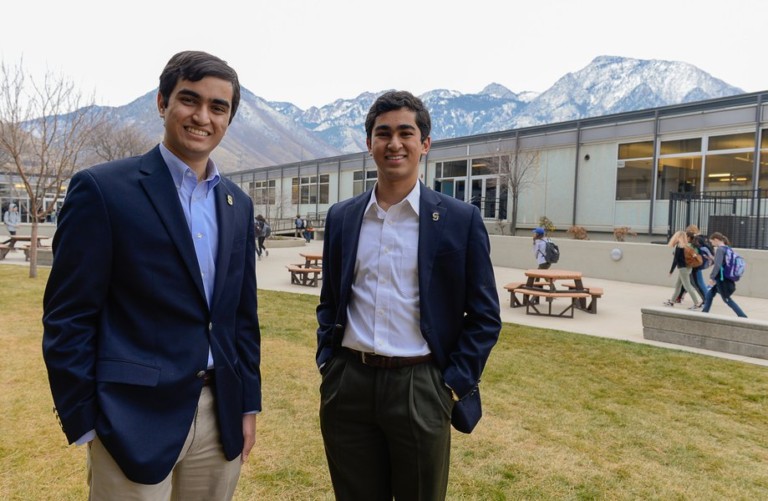 (Francisco Kjolseth | The Salt Lake Tribune) Twin 16-year-old brothers Kanishka, left, and Vikrant Ragula, seniors at Skyline, created a marketing campaign that helped get the bond passed that will rebuild their high school.

By Paul Rolly
This is a previously published article of the Salt Lake Tribune. To read the original article, click here

The recent voter approval of a $238 million bond for Granite School District to rebuild some outdated schools and renovate and improve several others came after a hard-fought campaign.

But outside of the politics and the public debates between well-funded factions on both sides of the issue, an intriguing two-person advocacy group formed on its own, with no formal backing and no organizational structure.

And this little band of brothers may have been as effective as any professional outfit in helping the measure pass by a 56 percent to 44 percent margin.

Twin brothers Kanishka and Vikrant Ragula are 16-year-old seniors at Skyline High School. They skipped the third grade and combined their eighth- and ninth-grade years into one year at middle school.

Their love of Skyline prompted them to take on the pro-bond campaign to save their school. It was just one more responsibility the brothers embraced, added to all their extracurricular activities, not to mention their vigorous courses, loaded with AP and International Baccalaureate classes.

“We met with Superintendent [Martin] Bates,” Vikrant said, “and he encouraged us.”

District officials and employees could not publicly advocate for the bond, but the students had no such restrictions.

The brothers went to public hearings on the bond and met with attendees — pro and con — giving them their arguments for rebuilding their school and undertaking the other projects on the list.

“We don’t have driver licenses yet,” Kanishka said, “so our parents drove us to all the meetings.”

They also attended gatherings sponsored by Voterise, a grass-roots group dedicated to increasing voter registration. And they set out to get all the students in their school who would be 18 by Election Day registered to vote.

That may have proved significant. Granite District spokesman Ben Horsley said more than 1,000 high school students in the district were eligible to vote.

The brothers also co-wrote an October op-ed piece in The Salt Lake Tribune that spelled out their reasons for backing the bond, including the need to equip classrooms with 21st-century educational technology. And they set up a website,www.rebuildskyline.org, which became the most visited one related to that topic.

Within Skyline’s boundaries, which the district calls a network, 51 percent of eligible voters cast ballots. That was the highest percentage of any district network, Horsley said. The next highest was neighboring Olympus, with 43 percent turnout.

Skyline is one of two high schools scheduled to be rebuilt, thanks to the bond. The other is Cyprus.

When in middle school, the brothers participated in Junior Achievement, taking on pretend parts as business and government leaders. Kanishka’s role was CEO of Zions Bank. Vikrant was CEO of the Larry H. Miller Group.

Scott Anderson, Zions’ real CEO, heard about the boys’ achievements and their efforts on the bond issue and so he invited them to the bank for a tour and a chat.

“I know their parents,” Anderson told me. “They told me of their sons’ involvement, so I invited them to Zions, showed them around and gave them encouragement.”

Anderson wrote a letter expressing his support for what the boys were doing for the bond campaign. He also asked them an important question about Skyline:

“Does the roof still leak?”

You see, Anderson is a Skyline graduate, Class of 1965, and part of the Our Schools Now coalition, which is pushing to get a ballot initiative for a $750 million tax bump to boost education.

“He told us how much he loved Skyline,” Kanishka said.

And, yes, the roof does still leak — as it has for the 50-plus years of the school’s existence.

It’s easy to see where the twins get their drive.

Their father, Ragula Bhaskar, and mother, Sanchaita Datta, are originally from India. They met while they were students at Penn State University.

Ragula has a doctorate in engineering and Sanchaita’s background is computer science.

Ragula served as chairman of the Governor’s Office of Economic Development. He also led the Living Planet Aquarium board and currently is on the Hogle Zoo board.

Sanchaita serves on the Presidential Advisory Board for Utah Valley University and the board of trustees for Salt Lake Community College.

Stay tuned for the types of impressive credentials Vikrant and Kanishka accumulate, presumably after they get their driver licenses.

Computer Science In Every Utah Classroom Becoming A Reality

Are you Business Equality Leader certified?