On behalf of a broad coalition of national, state and regional technology councils, we write today to express our strong support for H.R. 1361/S. 553, the Blockchain Promotion Act of 2019, and urge the House of Representatives and Senate to pass this important legislation during the 116th Congress.

Emerging technologies such as blockchain are increasingly interwoven into our nation’s economy and national security. Blockchain technology is evolving at a rapid pace, and there is a general agreement that blockchain can be used to improve the way the government currently does business. Public and private sector use cases for blockchain technology touch almost every sector from health care and real estate to cybersecurity and education. By 2025, the business value added by blockchain will grow to slightly more than $176 billion, then surge to exceed $3.1 trillion by2030, according to a recent forecast by Gartner.

The Blockchain Promotion Act of 2019 would direct the Department of Commerce to establish a blockchain working group to recommend a consensus-based definition of the technology. The working group would also consider recommendations for the National Telecommunications andInformation Administration (NTIA) and Federal Communications Commission (FCC) to undertake a study that would examine the potential impact of blockchain on spectrum policy and opportunities for the adoption of blockchain to promote efficiencies within the Federal government.

We stand ready to help support the Blockchain Promotion Act of 2019 and respectfully request that it be passed in the House of Representatives and Senate in the 116th Congress. 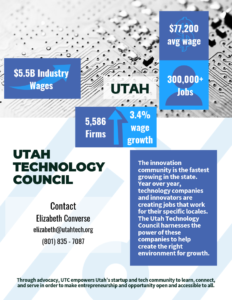